As of 2016, Bono is a better woman than you. Don’t look at me, I don’t make the rules, that’s Glamour Magazine, who have officially put Bono on their ‘Woman of the Year’ list.

That’s right ladies, we can’t even have shitty women’s magazine awards to ourselves anymore.

The magazine has received a lot of backlash on social media, as dumb as fuck decisions usually do.

Does Glamour Magazine know giving Bono the "Woman of the year" award for trying to undo patriarchy undercuts the entire point of the award?

Bono has been named Glamour's woman of the year. To be fair with only 3.7b women it must be tough to find a worthy one

Glamour, bless their souls, have decided to ride the wave of backlash by doubling down in their decision. According to editor, Cindi Leive, the idea of having a man on the list has been brought up in previous years but had always been scrapped before the final list made its debut. But now, she said, “it started to seem that that might be an outdated way of looking at things”.

Wow. Simone Biles watch out, those mental gymnastics might surpass your floor routine.

In the impressive movement of shoving her foot even further into her mouth, Leive continued saying,

‘The idea that a man who could select any cause in the world to call his own, or no cause at all, is choosing to work, and not just for one night or at a special event, but consistently day after day and month after month on behalf of women, is incredibly cool and absolutely deserves applause.’

Oh my word. A man, a MAN, has decided to give a shit about half the world’s population? Not just like sometimes, but most of the time? Groundbreaking. I digress, maybe his work does deserve applause. But not an award dedicated to women, maybe?

I mean, okay, here’s what happens when you Google ‘bono + women’s rights.’

I’m not saying he doesn’t support women’s rights. I’m saying that just maybe, JUST MAYBE, he doesn’t deserve an award meant for women for his actions.

Bono said he was “sure he didn’t deserve it” but I mean, he still took part in the photoshoot, because you, know, why the fuck not? 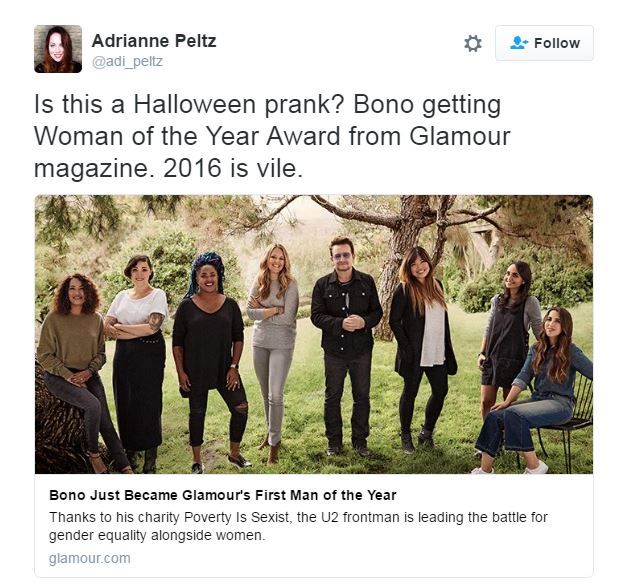 Honestly, at this point, it’s time to stop blaming 2016. It’s just revealing everyone for their true selves we should be THANKFUL.

I assume this is just some attention-seeking bullshit, but still. I mean, I still don’t think any man deserves to take a woman’s spot, but if they have to, could it at least not be a cis straight white male?

Glamour, I’m not trying to be dramatic, but you’re the sole reason print magazins are going out of business.